The "Courtyard of Palazzo Mattei" in Rome is just beyond comparison in this area of the Jewish Ghetto. It's a hidden gem that's open for everyone to peek.

#art & culture
read the news on Rome Spotted by Locals 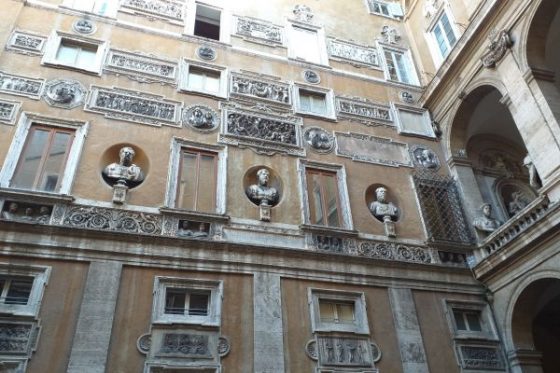 One of the pleasures of visiting the Jewish Ghetto is the sense of the unexpected. I’ve spent hours and hours exploring this small neighbourhood of central Rome, and yet I always feel like I’m about to stumble across something new. However, I don’t think any discovery can match up to my first glimpse of the courtyard of Palazzo Mattei.

Palazzo Mattei di Giove was built in the early 17th century and belonged to the aristocratic Mattei family. It was also briefly home to Caravaggio, when he was at the height of his fame – one of the most popular and notorious painters in Rome. Today the building is still in use, occupied by the offices of some cultural institutions, and not open to the general public.

The courtyard, on the other hand, is open to anyone who feels like taking a peek. You can enter from Via Michelangelo Caetani or Via Funari, walking through the main doors to find yourself in an astonishing central courtyard which is decorated with countless busts, plaques and other fragments from antiquity. It’s the closest thing to being in the real-life version of Piranesi’s “Via Appia” – standing surrounded on every side by a dizzying array of marble statues. Only in Rome can you randomly come across an open-air museum combining Baroque architecture and ancient Roman treasures…

While you’re in the area, make sure you pay a visit to the nearby Fontana delle Tartarughe (“turtle fountain”) in one of Rome’s prettiest piazzas.