Have you ever heard of the Blue Flags? Every year the regions that make up Italy are examined to determine which beaches are the cleanest and this recognition obviously gives a huge boost to tourism in these selected areas. This “certificate” is attributed by the Foundation for Environmental Education even outside of Italy (in over […] 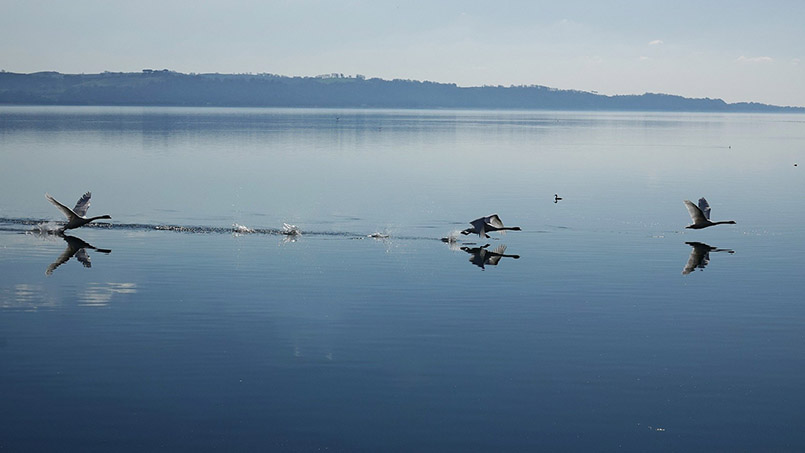 Have you ever heard of the Blue Flags? Every year the regions that make up Italy are examined to determine which beaches are the cleanest and this recognition obviously gives a huge boost to tourism in these selected areas.

This “certificate” is attributed by the Foundation for Environmental Education even outside of Italy (in over 70 countries!) and also takes into account the level of services offered to tourists in the destinations considered, as well as the sustainability there.

All in all, a Blue Flag is a great sign (sorry, we just had to make that joke!) to know where to go during the summer if you wish to take a day trip out of Rome. By the way, many of the 11 Blue Flags that were assigned to the Lazio Region in 2021 have already been featured as day trip destinations on this very blog!

In this post, we will give you a quick rundown of each of the above, with information on how best to reach them and how to secure a place on the beaches there!

We mentioned this before on our blog but it bears repeating: beaches in Italy consist of both free establishments and paid establishments (the term for those is “stabilimento balneare“).

Seaside resorts are only accessed by paying, and they’re much more frequent in those areas that are easier to get to, so most of the times these are the only ones you’ll be able to see as you get off a train or after parking your rented car. Do not get discouraged: do your research, because public, free-of-charge beaches do exist (they’re required by law). They’re only, and again for the most part, a little more remote and hard to reach.

While we’re on the subject of doing research, please keep in mind that due to anti-Covid policies, if you do decide to rely on a beach resort in Italy, you’ll need to book your spot beforehand.

Be aware that you may be requested to pay a premium to use the facilities over the weekend, and there is no guarantee you will find a place on Saturdays and Sundays, so our best suggestion is a) consider going in the middle of the week and b) look in advance for beach resorts you like, contact them, ask them if they’ll have you (some won’t! But only because they work on a seasonal pass basis) and the price for a daily pass. The large majority of these places has websites and social media accounts as well as dedicated platforms or apps to book your place from.

What you can expect to find in a beach resort in Italy: locker rooms, restrooms and showers (you may encounter some that are coin-operated to reduce water wastage), cafes and in a few cases, restaurants, as well as sports equipment (which varies from place to place). There you can also rent beach umbrellas and deck chairs (bringing your own is not allowed, but always remember to bring your own towels!).

Of course a public beach has none of the above (there may be public toilets at the very most) so it isn’t for everyone. Nonetheless, it is the cheaper option! 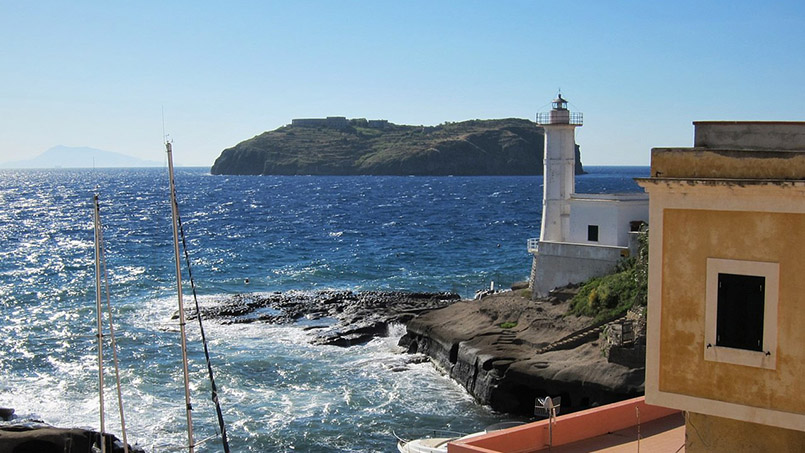 The small island of Santo Stefano as seen from Ventotene, Photo by IslandVita from Wikimedia Commons
With the exception of Trevignano, on Lake Bracciano, all the chosen Blue Flags for 2021 are located south of Rome and are quite easily reachable via train from the main hub at Roma Termini as they’re all scattered along the FL7 regional train line:

Three major exceptions are the neighboring San Felice Circeo, Terracina and Sabaudia, which are more easily reached by car (but if you don’t have one, the closest train station to all three towns is Priverno-Fossanova, some 20 minutes from each of them. Taxis are available outside of the train station).

Fondi and
Sperlonga
share a train station while the train station for Gaeta is really in Formia. As for Ventotene, prepare to sail! This small island is not as famous as party-central Ponza, is quainter and quieter. Ferries and boats to it depart regularly from Anzio or Formia.

Finally, Minturno is the end of the line for most regional trains coming from Rome but do be aware that yours could continue towards Naples, so make sure you get off at the right stop!

Of course so far we have mentioned how most Blue Flag destinations can be reached with public transport in the form of a train ride. However, using a car would allow you to reach those beaches that are more distant from the center of each village/town and would allow for more flexibility.

Do keep in mind, though, that the main routes between Rome and your Blue Flag destination, while scenic, are extremely busy and not exactly suitable for those who are not accustomed with the Italian driving style. Another factor to be considered is the frequent speed camera/ZTL systems in place in the mentioned towns: if you’re not familiar with those, you may be fined without you realizing (this kind of policing is unmanned).

A public bus (the service is operated by Co.Tral with extremely competitive prices) could be a sensible compromise, but on the other hand it would take you longer to get there and come back to Rome, so the consensus here at From Home to Rome is to go by train.

Or ask us for the best quote for a private vehicle to get you to your preferred destination and take you back in the evening, a service made possible by our partners at Gianni Conti Car Service! 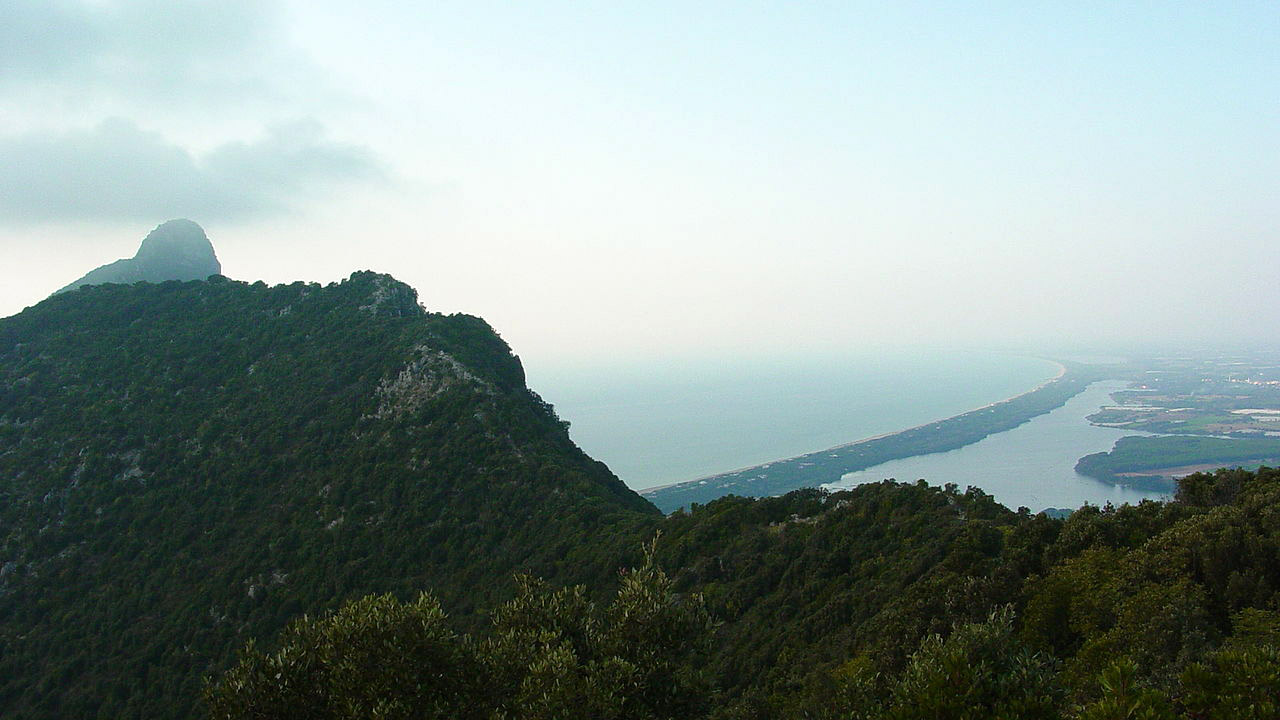 Sabaudia seen from the Mount Circeo, Photo by GreyElfGTf (Public domain)
Finally, we would be remiss if we didn’t mention something about the location of the best 2021 Blue Flag beaches in the selected destinations above. While it’s true that a Blue Flag is assigned to the whole of the town, there are places that will be far more popular and crowded and maybe not to everyone’s liking, and there will be places that will be not as easily accessed.

One such examples is Sabaudia: stunning, private villas have been built over the dunes there, and even though footpaths should be available by law for the public to reach the beach, these are not easily found. We recommend opting to go to Terracina instead, or San Felice Circeo, where the situation is not as severe or confusing for a foreign visitor.

If you choose to go to Sperlonga or Fondi, opt for beaches that are at the very edge of both towns (either north or south): there are higher chances of finding a parking spot if you go there driving, as well as finding a spot in a public beach, yet close to some beach resorts that can sell drinks or sandwiches. This is true even for Anzio, although for the lazy traveler, one public beach is on the waterfront called “Lungomare delle Sirene“.

The same applies to
Gaeta
and Trevignano: for the former, look for a spot you like north of the city around the Sant’Agostino/Torre San Vito areas, along the SR 213 road (“Via Flacca”). For the latter, rocky stretches of beach are mostly found North-east of the busiest part of town.

In Minturno, accessible beaches are really in “Marina di Minturno”, but if you don’t feel like getting all the way there, try the “Spiaggia dei Sassolini” (“Pebble Beach”), relatively closer to the train station and city center, although you have to walk along a winding road in a natural park – not recommended, but if you have a taxi option we suggest you use it!